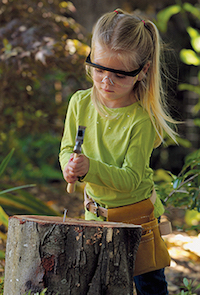 Children as young as three-years-old, after several months in a Montessori classroom, are able to choose their own work and focus on and finish their tasks. Through observation and experimentation, Montessori discovered the importance of a two-and-a-half to three-hour uninterrupted work period. The last hour of a lengthy work period is usually when children are most likely to choose challenging work and concentrate deeply.

Montessori once observed a three-year-old repeat the knobbed cylinders activity 44 times. The girl's concentration did not waver when Montessori tested it, first picking up the girl in her chair and placing her (still in her chair) on top of her desk and then asking classmates to sing. When she stopped working of her own accord, "...she looked round with a satisfied air, almost as if waking from a refreshing nap." Montessori called this a "never-to-be-forgotten" discovery. (Spontaneous Activity in Education)

Phases of the Work Period

Montessori and her directresses carefully observed the phases of children's work during long work periods. They noted that in the first hour and twenty minutes children often chose an easy initial task, followed by a moderately challenging activity. After this, ten minutes of "false fatigue" occurred as children appeared restless and classroom noise increased. This is the time when many teachers get uneasy and end the work period. However, false fatigue is actually "preparation for the culminating work, " when children choose challenging work and concentrate deeply. When finished, there is a period of "contemplation" as children appear deeply satisfied and at peace. (ibid)

Children in Montessori classrooms become absorbed in their work because they have the freedom to choose activities that interest them. In classrooms where the work period is less than two hours long, children rarely experience the deep concentration where leaps of cognitive development can take place. Children are understandably hesitant to choose challenging work if they think they won't have time to complete it (or repeat it 44 times).

At 10 o'clock, there is a great commotion; the children are restless; they neither work nor go in quest of materials. The onlooker gets an impression of a tired class, about to become disorderly. After a few minutes, the most perfect order reigns once more. The children are promptly absorbed in work again; they have chosen new and more difficult occupations.
(ibid)

False fatigue is similar to adults taking a coffee break after working hard. If children are disrupting others, they can be quietly redirected, but too much interference actually prolongs the period of false fatigue. Instead of anxiously over-controlling or ending the work period, we must trust children to return to work. We can then observe whether they choose their most challenging task of the day.

During the morning work period, children receive individual or small group lessons, work at their own pace with materials they choose, and serve themselves snack. Many schools have a mandatory circle (often lasting 30-40 minutes) near the start or end of the work period. At the beginning of the school year, before the class has normalized, more whole group activities are often necessary.

However, any interruption to the work period (including circle) disrupts the child's exploration, focus, mastery of skills, critical thinking, and problem solving. Lengthy circles significantly shorten the work period. Without sufficient time, children rarely concentrate deeply on really challenging work. Instead of mandatory circle time, you could invite smaller groups of children to sing, listen to a story, or observe an art lesson. A good time for a short circle (to do the calendar or sing songs) is during the transition to lunch, while children are cleaning up from the work period.

If your school enlists specialists to teach enrichment subjects (music, Spanish, etc.), perhaps they could all be scheduled on the same day. This would maximize the number of uninterrupted work periods.

As an intern supervisor, I have visited dozens of Montessori classrooms. Only a handful had a lengthy, uninterrupted work period. Here are some steps you can take to move towards a three-hour work period:

Sometimes teachers wonder if it's still possible for today's children to attain the kind of deep concentration that Montessori called a "miracle." Are our children, surrounded by screens, incapable of the same focused attention as children in Montessori's time?

I was recently inspired by observing Montessori philosophy in action, in the kind of classroom that Montessori wrote about so eloquently. It had all of the key elements, including a three-hour work period and a mixed age group of three- to six-year-olds. The children were engaged in a variety of interesting activities, working without seeming to need the teachers. An older child spontaneously helped a younger one clean up a spill, teaching her how to use the mop. A large group of five-year-olds organized their own lesson, taking turns picking out rivers in an atlas. After the short period of false fatigue, there was a hush in the room as many children worked with profound concentration.

A Montessori teacher put it this way: "Protect the three-hour work period with your life! It's one of the most important ingredients in our method."