Montessori Inclusion: An Interview
Thoughts from three of the book's collaborators. 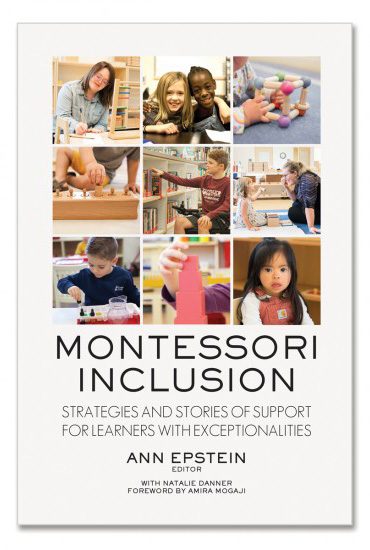 Montessori Inclusion: Strategies and Stories of Support for Learners with Exceptionalities is a collaborative anthology featuring the voices of 20 distinguished contributors, offering a roadmap for accommodating children with special needs in mainstream classrooms. We interviewed three Montessorians who have been instrumental in advocating for children with exceptionalities: the editor of the book, Ann Epstein, a Montessori teacher educator for nearly 40 years, Elizabeth Slade, the founding coach of the National Center for Montessori in the Public Sector (NCMPS), who currently works for Public Montessori in Action, and Keith Whitescarver, who along with his wife, Jackie Cossentino, cofounded the NCMPS.

The book is dedicated to Jackie who passed away in 2019. She firmly believed in the ethical mandate of Montessori classrooms to include children with special needs. Jackie said, "Too many children are labeled, isolated, and served in ways that impede rather than release their potential. And too many of those children are black, brown, and low income. Activating the best of Montessori education so that all of us can follow all of the children is an urgent need." (Montessori Inclusion, 2020)

(Irene Baker) What was the impetus for this book?

(Ann Epstein) We wanted to gather the most current information to assist Montessori teachers, administrators, and family members looking for ways to include and support kids with a wide range of exceptionalities.

(Irene) Are there particular chapters that would be most useful for new teachers?

(Ann) Yes, the first chapters do a wonderful job of bridging the world of special education and the world of Montessori, including the terminology.

Later chapters look at inclusive Montessori schools, including Raintree in Lawrence, Kansas, a Montessori program that was launched in the 1980s. There are miracles told in that chapter. Chapter 11 highlights the Elizabeth Academy, an inclusive Montessori School in Salt Lake City, discussing what worked, what the pitfalls were, and where they struggled. Both of those chapters include very practical takeaways for all teachers.

My chapter, "Montessori Teacher Supports for Children with Exceptionalities" focuses on supports for children struggling with academic and behavioral difficulties. I discuss variations and extensions of lessons that can support kids who have trouble understanding sequence, or maybe can't figure out associating letters with sounds. I also encourage teachers to help children struggling with behavioral difficulties to find new ways to fulfill their unmet needs, such as practicing alternative behaviors with a peer.

(Keith Whitescarver) The book is thought-provoking for leaders handling special education at Montessori schools, particularly how to be fluent in both the language of traditional schools and the language of Montessori.

(Irene) How did you get involved in Montessori education?

(Keith) Jackie and I came to Montessori through our child. We were astounded by the pedagogy and the impact Montessori was having on our child. Soon we were both devoting our professional lives to promoting Montessori education.

(Elizabeth Slade) I found the Washington Montessori Institute in the phone book, joined the elementary teacher-training, and did my student teaching in public Montessori. When I met Jackie, our conversation wound around to our underserved children. I shared what we were doing in the Springfield, Massachusetts's public Montessori schools and she was intrigued.

I was a very atypical learner and dyslexic. I would have thrived in a Montessori school. I have big connections to those children who have so much potential, but a number of obstacles, not the least of which is often the educational system itself.

(Ann) I was fortunate to find Montessori early in my career. I was going to be a speech and language therapist but felt pulled towards a career that would allow me to work with the whole child, rather than just one part of their development. I completed my Montessori early childhood certification and my doctorate in early childhood special education.

(Elizabeth) Child Study has three components: the family, the team (teachers by level), and if needed, the transition to special education. Child Study is both a mindset and a method. It's a way of thinking about children that involves a language of reverence with the child at the center. The indirect aim of Child Study is about building professional development. It's wonderful for novice teachers to learn from more experienced teachers on the team.

It begins in conversation with the family when there's a concern. An action plan details what we can do at home and at school, built around the strengths and interests of the child—not what's wrong with this child or how can we fix or make the child conform.

The team comes together weekly to ask questions, discuss data collection, and evaluate whether they've met the goals. This is a collaborative journey. If the child needs special education, we transition the child and family with dignity into the next level of services, where there's more expertise to meet the needs of the child.

I've been in many schools implementing Child Study and I see things calming down immensely. What if we had a consistent way that we responded when there's an upset, with a shared approach throughout the school or even throughout many schools?

(Keith) When done right, Child Study is effective in limiting the number of children identified as being in need of special education. For a public Montessori school this is a blessing and a curse. Critics say, "Well, of course, you're doing great in assessment outcomes. You have cherry-picked students and don't have the same percentage of children with special needs as those in traditional public schools." But Montessori is good at addressing children's individual needs at an early age and that's why our percentage of children with special needs is lower! 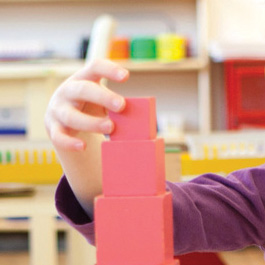 (Irene) I loved the case study in Chapter 3 of Serena, the three-year-old who entered a Montessori school with few language skills, unable to focus, disturbing others. The team met and learned that Serena wore princess clothes, loved the cat, Arlene, from the Garfield cartoon, and was only interested in the Pink Tower. One team member realized that all three of those items were pink, including the cat! They created a series of Practical Life activities using pink items that successfully engaged Serena's interest and focus. They also created high-interest language work around cats.

(Elizabeth) Yes, it's amazing how attuned Montessori educators are to children, inspiring them towards their natural love of learning. Having the interests of children lead the way to a strong action plan is an important element of the process.

(Ann) Elizabeth, can you discuss the role of the coach in Child Study?

(Elizabeth) The Montessori coach's role is in helping us stay on the constructivist end so that we don't so quickly devolve to sticker charts or other behavior modification, rather than getting at what's going on with the child. We want to be sure there's that healthy tension between the behaviorist and the constructivist approach to working with children experiencing challenges.

(Keith) Everything is virtual now; the learning is done at home. How do you involve parents in Child Study now?

(Elizabeth) COVID has asked us to develop things that we might keep after we return to school. One school started a weekly coffee hour with a Child Study lead, where parents could drop in and support each other. Parents ask how to encourage their child's focus and concentration, discussing strategies like delayed gratification, instead of punishments and rewards.

When home and school became the same place, we noticed a new appreciation by parents for the challenges and efforts at school which had been fairly invisible. The extra above-and-beyond that schools had been doing, the extra love to support children being their very best self is more appreciated now by families. This was fascinating and very unexpected.

(Ann) It's challenging not to be face-to-face, but there are opportunities too. We need to find out what kind of assistance families need. A lot of that is based on communication and a feeling of "I got you. We are in sync here."

(Irene) A theme throughout the book, including the chapter, "Trauma-Informed Montessori" addresses the impact on children of racism, prejudice, and poverty. How is the Montessori community responding to these issues?

(Elizabeth) A big part of the passion for me around public Montessori is that it's for everyone. It's wildly diverse. There's no picking and choosing who is and isn't in Montessori. One of the projects we're developing is a System of Justness. We use the word "just-ness" to capture the point of a just and fair experience for every person, rather than "justice" which brings to mind the criminal justice system.

We're working really hard on the Nautilus approach, to replace discipline policies, police presence, and the over-identification of black and brown children for suspension. The number of minutes that those children are out of class, compared to their white peers, is unforgivable.

It's called Nautilus because at the center is the child's work and we're always looping back. Even if we take a few steps away, and it's a wider arc, still, it's right back to work, where children can focus and concentrate. Montessori education understands that normalization happens through work. When there's an upset we do our best to not have children leave the classroom, taking them away from their work, the very thing that will help them re-center.

(Keith) When I used to go to conferences and give talks, I was always amazed by the number of education reform types who talked about their own children being in Montessori schools, but how that approach wouldn't work for the black or brown children they were serving. This book could help open up their eyes.

There's a natural affinity with Montessori's larger picture of the cosmos, peace education, and the child's place in it, that should lead Montessorians to take a leadership role in social justice and to examine widely-held assumptions, both within the community and within their own schools.

(Irene) What can Montessorians learn from special education teachers?

(Keith) What I find really exciting is when it goes in the other direction: the traditional special educator who picks up ideas from the Montessori approach. If that person is in a Montessori school long enough, it begins to rub off and hopefully filter out into the broader world.

(Ann) Montessorians and special educators have in common that every child is unique. How can we best support that uniqueness and figure out what's going to be successful for children who are struggling?

(Elizabeth) I hope this book will be the beginning of shaping our thinking around Montessori classrooms as an inclusive place for all learners.

(Irene) Thank you. It's been an honor to talk with all of you.

(This interview has been edited for length and clarity.)

—by Irene Baker, MEd, Montessori Educational Consultant at Montessori Services. She holds both primary (ages 3-6) and elementary (ages 6-12) Montessori certifications and has taught at all three levels. For over 20 years, she has served as a Montessori consultant and teacher-trainer for primary and elementary levels, and has presented workshops for teachers at schools and AMS conferences. Her work with students and teachers is infused with her passions: storytelling, history, social justice, non-violent (compassionate) communication, poetry, meditation, music, and the natural world.