Walking on the Meandering Line
Activities for the classroom line. 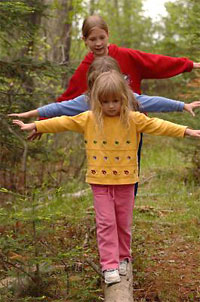 "The direction of the line makes it rather difficult for a child to maintain his balance and therefore it enables him to practice and perfect this ability."
—Maria Montessori, The Discovery of the Child

Sanford Jones and Jean Miller* both recall that when Maria Montessori's son Mario and his wife Ada visited America in the early 1970's, they were puzzled to see children doing the Walking on the Line exercises on a line in the shape of an ellipse (used in many classrooms for group activities). Ada described how in Europe, a meandering line, with its irregular curves, gives children more points of interest and greater challenge. She also said that a different, much larger ellipse should be used to accommodate the faster movements such as marching, running, and skipping.

Sanford immediately removed the ellipse in his classroom and replaced it with a meandering line, which he said, "made all the difference in the world." Children began to spontaneously choose to walk on the line daily, as a natural part of the work period, whereas with the elliptical line, he had to make Walking on the Line a group activity in order to interest the children.

The Purpose of Walking on the Line

Montessori was a careful observer and she noticed that children liked to walk along logs and curbs. She understood that they were mastering their sense of balance. Since the child (3-6 years old) is in a sensitive period for the perfection of movement, she created the Walking on the Line exercises to help children develop coordination, balance, muscular control, and body awareness. 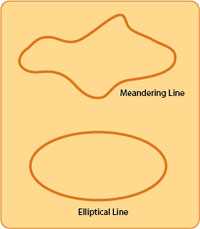 You can draw a curvy line in your classroom with chalk, or make the line with a long piece of yarn on a carpeted surface. For a more permanent line, use painter's or cloth tape. Where should the line go? Be creative! You can have it meander over to the birdcage, around the snack table and past a window, before joining up where it began.

Rather than a formal lesson to introduce Walking on the Line, Montessori described in Dr. Montessori's Own Handbook the teacher going over to the line by herself and beginning to walk on it, without saying a word. In a short time some children began to imitate her as they made "efforts exactly similar to those of real tight-rope walkers..."

After the children are able to stay on the line, introduce heel-to-toe walking as you play soft background music. Later, provide more challenge with items the children can choose to carry as they walk:

"It should be a very simple march...which accompanies and enlivens the spontaneous efforts of the children.... When the same march is repeated over several days, the children end by feeling the rhythm and by following it with movements of their arms and feet."
—Maria Montessori, Dr. Montessori's Own Handbook

As children mature, they are capable of more complicated steps. To move naturally, children need a very large ellipse for the faster locomotor movements that come after walking: marching, running, galloping, skipping, and processional walking (step-touch). The long sides of an ellipse provide a straighter path so that children can concentrate on the faster steps. Most of us are accustomed to using the ellipse for group activities as well as for Walking on the Line exercises. However, most classroom ellipses are too small for the faster movements, so you'll need to move to a larger room, or draw the ellipse outside with chalk. Jean Miller recalls Mario and Ada Montessori observing children as they marched and skipped on a line around the edge of a large gymnasium while Sanford Jones played the piano. Afterwards Mario and Ada exclaimed: "Now that is the way the line is supposed to be! When did it get to be so small?"

How do we encourage children to move gracefully and rhythmically, without over-directing them?

Later play compositions that alternate rhythms, such as "walk/skip/walk" so that children learn to listen closely. With practice, they become skilled at changing their movements to match the music. The "Let's Move!" CD has shorter musical selections to accompany creative suggestions such as "Swaying like an elephant" and "Blown by the wind."

Because Montessori recognized the importance of movement in children's development, she created the Walking on the Line Activities. Whether walking on the meandering line or galloping on the larger ellipse, children delight in perfecting their movements.

"For little children, the feet are as important as the hands."
—Dr. Elisabeth Caspari, Let's Move: Music for Work on the Line

*We are so grateful to Jean Miller (Elementary Montessori teacher-trainer) and Sanford Jones (Montessori educator, composer, and co-founder of Youth Opera International) for sharing their knowledge and memories.